Prop. A approval has a few twists 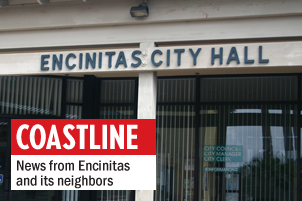 Even after Proposition A’s win in a June 18 Encinitas special election, it appeared to be a game of numbers and letters to get the City Council to adopt and implement the measure, including one state Coastal Commission letter, one letter from a lawyer and a second and reversed Coastal Commission letter, followed by several impassioned speeches at a July 10 City Council meeting.

Official election results from the county registrar of voters show the measure won 51.85 percent to 48.15 percent – 6,675 votes to 6,198 votes, respectively. The measure limits building heights in Encinitas to two stories in addition to requiring public votes on land-use issues.

Before the council meeting, Bruce Ehlers, a major proponent of Prop. A, said he wasn’t surprised by the popular vote, having been “cautiously optimistic” that it would pass. But his happiness was guarded because he seemed to be waiting for the idiomatic other shoe to drop.

“We look forward to the July 10 adoption but I’m sure we’re not completely done,” Ehlers said before the meeting. “I just anticipate there’ll be some challenge either by the council or some developer … but the people spoke and I hope that council will pay attention to what the majority of voters wanted.”

The other shoe did drop, in the form of a letter from the Coastal Commission addressed to city planner Jeff Murphy, which was released to the North Coast Current by Mayor Teresa Barth.

The letter, dated July 1, was in response to questions asked by the City Council on May 29. The Coastal Commission waited until after the election to send in its answer.

The council’s first question was, “Does the Coastal Commission need to approve/certify all, or a portion of Proposition A before it can take effect on property located within the Coastal Zone?”

In the letter, he went on to say “such local actions that affect the regulation of land use in the coastal zone must be submitted to the Coastal Commission as LCP amendments; and, unless and until the Commission certifies the initiative as an LCP amendment, the initiative measure has no legal force or effect in the coastal zone for purposes of the Coastal Act.”

LCP refers to the city’s Local Coastal Program, which outlines how future development and resource protection are to be handled within the coastal zone.

In a phone interview, Barth declined to comment on the letter but agreed that state agencies do supersede local government.

The City Council referred to the letter when it stated in staff notes that it would “be working with the CCC staff, as expeditiously as possible, to facilitate the Coastal Commission’s review and potential approval of the initiative’s amendments under its jurisdiction.”

It also stated that the regulations of the initiative would go into effect for properties outside the Coastal Zone on July 21, 10 days after the council voted to adopt the amendment.

In the letter, DeLano first pointed out that the amendment was effective the day after the election, not 10 days after adoption by council vote. Second, he asserted that the amendment was not limited to the properties outside the coastal zone, but to the whole city. In addition, he challenged the Coastal Commission, saying “that letter’s analysis of the initiative and of the City’s Local Coastal Program (“LCP”) is flawed.”

He wrote: “Since the initiative did not amend any aspect of the LCP and since it would not preclude the City from implementing the LCP, the July 1st letter’s assertions of Commission jurisdiction are invalid.”

Then, in an another turn of events, the Coastal Commission came forward on July 10 with what it called “the final version” of its July 1 letter.

The commission said: “On July 1, 2013, Commission staff mistakenly sent an incorrect version of the letter titled ‘Response to email dated May 29, 2013 regarding Proposition A.’”

The Coastal Commission asked that this final edit be distributed to the City Council for the meeting July 10.

In a final push, several proponents of Prop. A took the mic at the meeting to urge the City Council to adopt Prop. A without reservation.