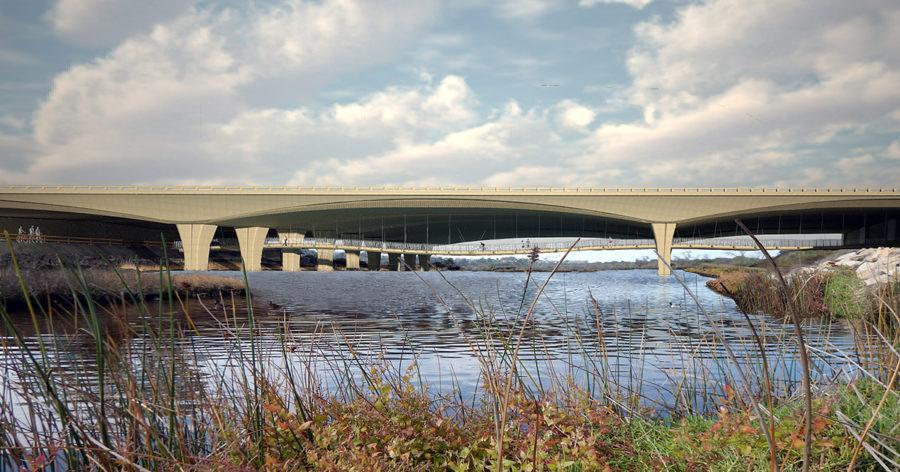 This Caltrans rendering shows a possible configuration for a pedestrian bridge across San Elijo Lagoon under Interstate 5 in Encinitas. (Caltrans photo)

The San Elijo Lagoon is headed into its next phase of restoration and enhancement and looks to be ahead of schedule, according to project officials.

“My goal, if I can save my project time, that’s as good as money to me,” said Doug Gibson, executive director and principal scientist for the San Elijo Lagoon Conservancy. “Being able to cut seven months out of this, it’s huge. That’s an entire growing season.”

Gibson said the original plan to truck out sand and move it to another location was modified when it was realized they could deposit the sand on Cardiff State Beach and instead use it to create more recreational usage for the public. The result is that the lagoon restoration will finish early, Gibson said.

According to Gibson, 440,000 cubic feet of sand ended up being moved out of the lagoon and onto Cardiff State Beach and Fletcher Cove.

Because of the conservancy’s idea to replenish Cardiff State Beach with native sand from the lagoon, the San Elijo Lagoon Conservancy was given a beach restoration award from the American Shore and Beach Preservation Association for being one of the nation’s best restored beaches.

“I thought it was great,” Gibson said. “Here we are, not being in the beach-building business, and we win an award.”

However, because of this plan modification, Gibson said they had to go back through and re-phase the project.

According to Gibson, there were originally five stages to the lagoon’s restoration for the BuildNCC project, but after the re-phasing there are now four stages and it is currently in the third stage. Gibson said the project should now be complete June 2020.

“The beauty of that is that we have the same contractor working on the lagoon, the railway, the highway and the bridge,” said Arturo Jacobo, Caltrans project manager for BuildNCC.

The San Elijo Lagoon, along with Caltrans, San Diego Association of Governments and other agencies, took a different approach with this freeway expansion and lagoon restoration by using one company to manage the projects. The company serves as both the contract manager and general contractor.

In order to prepare the community for this next phase, Gibson also participated in an open house held by SANDAG in Encinitas on Oct. 2 to talk to community members about what is coming and what to expect in terms of construction.

According to the lagoon’s website, one of the things that can be seen at the lagoon is the “beginning of construction to enhance mudflat habitats.”

Mudflats are areas that, depending on the tide, are either submerged or exposed throughout the day, and as the rise in sea level occurs over the coming decades, Gibson said these mudflats will create an important food source for the different species that inhabit the lagoon.

“We’re one of the first projects to take a stab at those future conditions,” Gibson said. “How is sea-level rise going to impact this lagoon? What steps can we take to leave stepping stones for other species?”

According to Gibson, one other step the lagoon is taking is the island that is being built.

“We’re one of the first projects to have this ability and we think it’s incredibly important to have these areas transition and be there,” Gibson said. “When species need to get up and out of the water, they have a place they can go.”

One of the bigger projects that will help enhance the lagoon’s function is the replacement of the San Elijo Lagoon freeway bridge that will also add two additional carpool lanes (also known as HOV lanes) to Interstate 5. According to documents provided by SANDAG at the open house, the “new bridge will also improve tidal flow and the overall health of the lagoon.”

Nancy Nickerson, deputy district director specializing in bridge construction for Caltrans, said what makes this bridge unique is the suspended pedestrian access that will hang beneath the new I-5 bridge that spans the lagoon.

Nickerson said not only will this be safer, but the new hanging bridge will provide better continuity to the trails that connect the east and west basins of the lagoon.

“The bridge is no longer going to be in your way, it’s going to now be part of the trail,” Nickerson said. “That’s very unique and the first for I-5.”

Jacobo also added that the trail will now be on both sides and will completely connect to Manchester Avenue.

“I’ve been building bridges for 30 years and I’ve never seen anything like it,” Nickerson said.