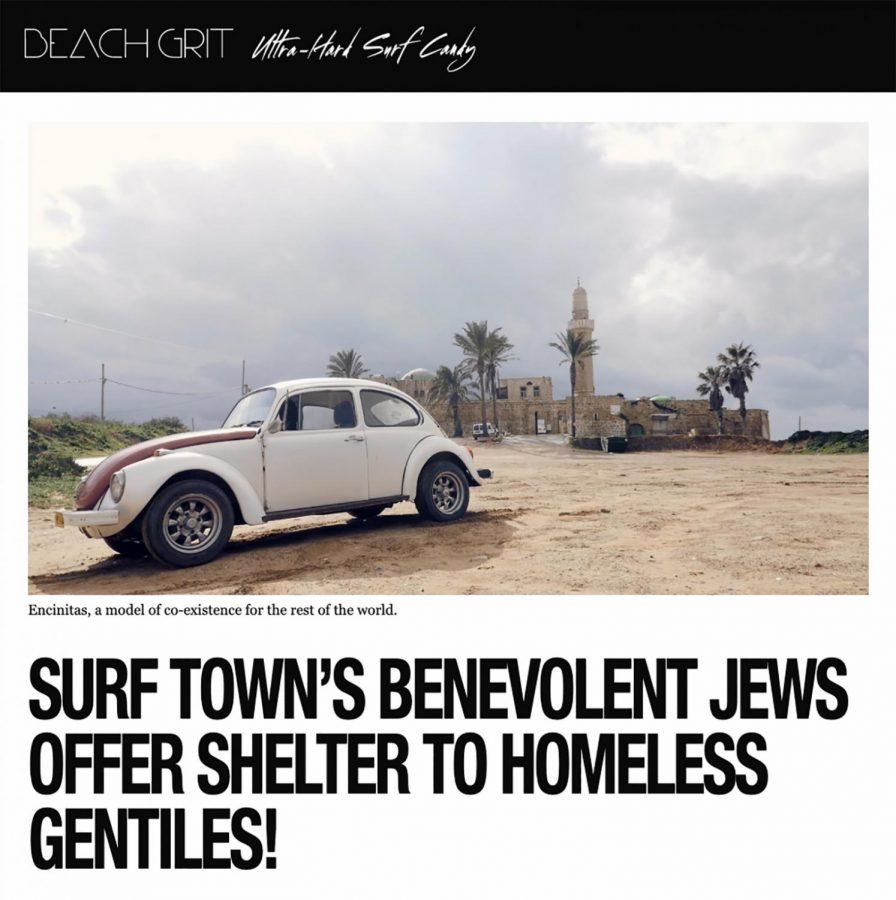 The Safe Parking Program, which was approved by the Encinitas City Council on Jan. 23, cleared the way for a parking lot allowing homeless individuals to sleep in their cars overnight. The program is one of four parking programs started by Jewish Family Service of San Diego and will be operated on the property of the Leichtag Foundation, a Jewish organization that owns the former Ecke Ranch in Leucadia.

North County Citizens Coalition recently filed a complaint in Superior Court against the city of Encinitas over its process of approving the lot.

The article, which was published on BeachGrit in February, praised the program but used language some in the community have deemed anti-Semitic.

Encinitas City Council member Tony Kranz said he thinks the writer was intending to provoke a reaction and was successful.

“(The writer was) using his flair as an author and there’s been a lot of social media buzz about whether he’s an anti-Semite, and I think a lot of people have come to his defense and said he’s not and that he just likes to provoke when he writes,” Kranz said.

Deputy Mayor Kellie Hinze said she didn’t feel she had the ability to immediately determine whether the article was anti-Semitic.

“I felt that rather than deciding first off whether or not I thought the article was anti-Semitic that I wanted to hear from Charlene (Seidle of the Leichtag Foundation) and speak to her about what led to her feelings that it was (anti-Semitic),” Hinze said.

Hinze said that through this experience, she felt it was more important to understand than to make a determination herself.

“I’ve been trying to educate myself, trying to find resources about how to look into what anti-Semitic language sounds like and how to catch it and how to be aware and to find every opportunity to condemn it,” Hinze said.

Julie Thunder, who announced her intent to run for mayor at a January City Council meeting, said that while it seems the author of the article enjoyed using bizarre language, she does not think there was anything anti-Semitic about it.

She added that she thinks Seidle, who is the executive vice president of the Leichtag Foundation, used the term anti-Semitism in reference to the article and controversy as ammunition against the group fighting the Safe Parking Program.

“It would be awful for any group of residents to post something that’s anti-Semitic, but that’s not what happened,” Thunder said. “So it just furthered the divide to have an executive vice president of a nonprofit that is pretty deeply involved in Encinitas claim that over 1,000 people are anti-Semitic.”

Derek Rielly, the author of the article and editor of BeachGrit, said in an email statement that he was shocked by the representation of his article by Seidle and others.

“It couldn’t be any less anti-Semitic,” Rielly said. “My position is this: Israel is one of the world’s great nations, certainly its bravest, and the Jewish people, overrepresented in every intellectual and philanthropic pursuit. Something I continuously push to my readership.”

Seidle said in an email statement that the Leichtag Foundation is proud of the Jewish traditions that guided them to work with Jewish Family Service on the parking program.

“While we cannot do everything to provide shelter to those in need, we can do something,” Seidle said.

She added that there is no place for anti-Semitism or hate in the community.

“It is crucial to identify and condemn hate in order to ensure the safety of everyone in our community,” Seidle said. “We appreciate the strong support we have received and feel fortunate to be in a region where we can care for those in need.”

Outside sources such as the San Diego Anti-Defamation League did not immediately respond to requests for comment on the BeachGrit article and the community’s reaction.

Kranz added that there are heightened sensitivities around the Safe Parking Program currently.

“As far as I’m concerned, there’s no question that the Leichtag Foundation as well as (Jewish Family Services) have been beat up pretty bad and … there’s just a lot of discontent that has I think been brought to the surface by the parking program,” he said.

“The Safe Parking Program is an intervention to stabilize people who are living in their cars to prevent them from entering into a downward spiral of chronic homelessness, which can be more expensive and more difficult to treat when it actually takes place,” Hinze said.

Thunder, who has opposed the program in the past, said some residents also asked the city to reject the proposal and run its own program without state funds. She said without state funds, the city could limit the parking lot to those who can show an affiliation to Encinitas.

“If we have a need for this lot and we have residents who are hurting, let’s open up our own city-owned lots,” she said.

She added that she doesn’t think there should continue to be a divide in the community.

“The Leichtag Foundation has done some really cool things in our community and I think they’re generally well liked, at least they were before all of this happened,” she said. “So I’m ready to get back on that train and find an equilibrium.”