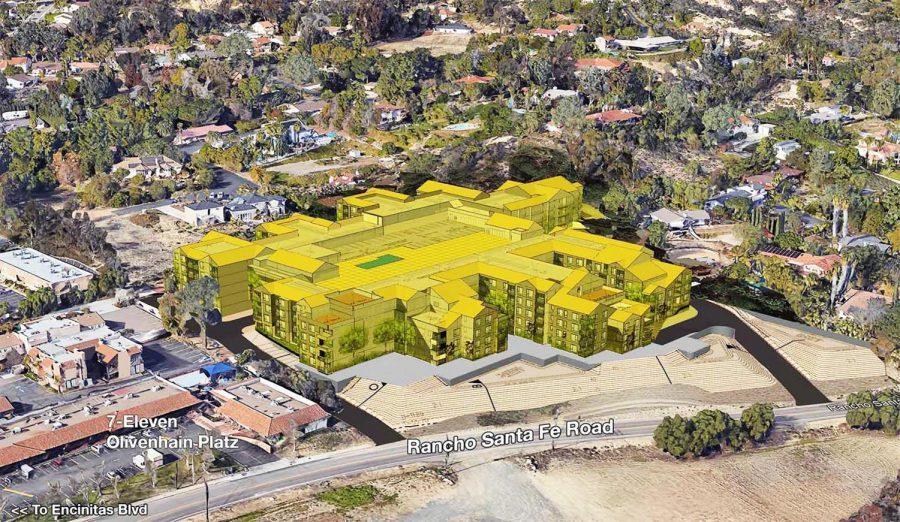 An Encinitas Residents for Responsible Development rendering shows the placement of the proposed Encinitas Boulevard Apartments in Olivenhain. (ERRD image)

A contentious apartment development in Olivenhain known as the Goodson Project was shot down by the Encinitas Planning Commission in August, but it could face a different outcome from the City Council this week after the decision prompted two appeals.

The appeals were handed down by Randy Goodson, the project applicant, and Encinitas Residents for Responsible Development, according to a city statement.

The Planning Commission sided against issuing a waiver for the proposed development — a six-story apartment complex with 277 units, 47 of which would’ve been considered low-income — on the basis that the height is double what’s permitted under the city’s General Plan. Some commissioners also took issue with the size of the affordable units, which included one bedroom and junior one bedroom options.

“I have a family of three kids and I can’t see how anybody could put a family of four or five people in a one-bedroom or junior one-bedroom apartment,” Commissioner Chris Ryan said in the Aug. 19 meeting.

The appeal from Encinitas Residents for Responsible Development seeks to bring additional grounds for rejecting the appeal to light, including concerns about the impacts of the development on traffic and fire evacuation times along Rancho Santa Fe Road, according to the group’s website.

Leucadia resident Cindy Cremona echoed those concerns and cited the Goodson Project as the “most egregious” of the developments currently being pushed by the city.

“If you’re familiar with Olivenhain, you know with a fire event it’s not a matter of if, but when,” Cremona said. “And it’s one road in and one road out.”

The Goodson Project is one of a group of developments being pursued in spite of citizen disapproval thanks to a 2018 ruling allowing the city to sidestep Proposition A until 2021.

Prop. A, approved by residents in 2013, requires voter approval of changes to the city’s planning and zoning policies. Residents’ generally adverse attitude toward high-density developments has made it difficult to bring the city into compliance with state housing mandates, which require plans for how the city will meet minimums for affordable and mid-priced units every eight years.

Even recent projects being proposed outside the bounds of Prop. A carry little promise of undoing the city’s lack of affordable housing, however, with the Goodson Project only comprising about 17% low-income units. City law requires that 15% of the units in proposed developments be affordably priced, and a Planning Commission recommendation to increase that minimum to 50% was shot down by the City Council this spring.

With fewer affordable units required, that means more developments will be needed to bring the city in compliance with state law.

The climate surrounding development and planning in Encinitas has generally put the city at odds with state housing mandates, an issue that seems likely to persist as the state pursues more aggressive housing initiatives.

State bills SB 9 and SB 10, signed into law by Gov. Gavin Newsom in September, increased the number of units that can be built on single-family lots and land parcels near transit, although neither of the bills included affordability provisions.

The Encinitas City Council is scheduled to hear both appeals pertaining to the Goodson Project on Oct. 13.