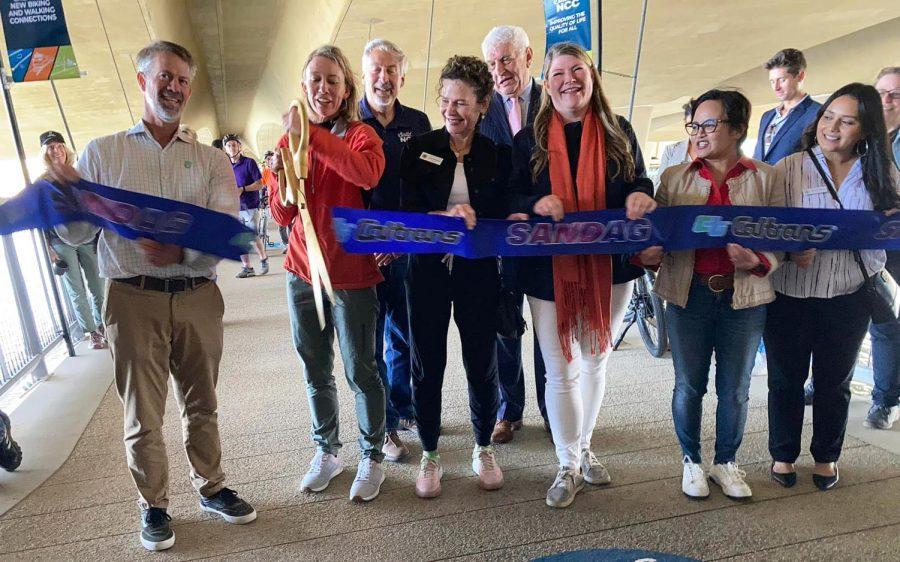 One of California’s largest wetland restoration projects came to a conclusion on Saturday, June 4, with the official opening of San Elijo Lagoon’s pedestrian suspension bridge in Encinitas.

The opening marks the end of nearly five years and about $120 million worth of work to restore the lagoon’s habitat and provide updated trails and other amenities, part of the massive Build NCC effort to widen Interstate 5 and update mass transit and pedestrian options along coastal north San Diego County. The half-cent TransNet tax funded the project.

Residents and officials inaugurated the pedestrian bridge, which runs under the new Interstate 5 bridge, by bicycle and on foot after a ribbon-cutting ceremony.

“Thirty-five years ago, we had this vision that San Elijo Lagoon Ecological Reserve could be restored,” Doug Gibson, Nature Collective executive director and principal scientist, said in a news release announcing the completion. “This area is a jewel in the crown of the San Diego region, and it’s our duty to protect it as best as we are able. Nature Collective and the TransNet Environmental Mitigation Program investment will support stepping stones for all to enjoy for many generations.”

The Nature Collective, a nonprofit land trust in charge of maintaining and tracking the San Elijo Ecological Reserve, began as the San Elijo Lagoon Conservancy. Its name changed in 2019 as the scope of its efforts expanded.

With the project’s completion, the Nature Collective will now monitor the reserve’s refuges, species and tides in anticipation of sea level rise and other climate-related changes. The effort, also part of a 50-year overall study of the lagoon, will continue through 2031 with post-construction funding from the San Diego Association of Governments.

Restoration of tidal flow has been a key component of the San Elijo project.

“Think of the main tidal channels as the lungs of the lagoon,” Gibson explained in the Nature Collective’s news release. “With every incoming tide, it’s like the lagoon takes a deep breath and today, three times as much water is coming in than before restoration.”

In addition, the Nature Collective conducted what is considered the most comprehensive sand replenishment surf monitoring study ever been done in California. The study looked at the effects of beach replenishment using dredged lagoon sands and lagoon restoration.

Among the milestones the Nature Conservancy observed during the restoration:

The return of thriving eelgrass to the lagoon, from one patch to 150 patches, thanks to improved tidal flow.

The first octopus seen in the lagoon channels since restoration work began more than 30 years ago; and five new fish species never seen before.

With the San Elijo project winding down, work now continues on other wetland projects in North County.

The second phase of the San Dieguito Lagoon Wetland Restoration near Del Mar is underway after beginning in January, a joint effort of SANDAG, Caltrans and the San Dieguito River Park Joint Powers Authority.

The $87 million TransNet tax-funded project is mitigation for the installation of Interstate 5 carpool/HOV lanes and double-track rail improvements, part of the North Coast Corridor Program, as well as for bridge replacement and widening of El Camino Real from San Dieguito Road to Via de la Valle.

Planning continues for restoration of the Buena Vista Lagoon between Carlsbad and Oceanside as well.

Project construction, estimated to cost between $80 million and $90 million, would return the lagoon to saltwater wetland from freshwater marsh by removing a weir at the outlet and creating a channel to allow tidal flow.