California teachers’ salaries by school district and their percent increase between 2018-2019 and 2019-2020 were provided by the Sacramento Bee in a recent report.

Locally, Del Mar Union School District teachers received the highest rate of increase — 6% — from one year to the next, and are paid the most of any local school district except for San Dieguito, although the 2019-2020 figures for Solana Beach School District’s teachers were not available.

The salary for San Dieguito Union High School District teachers came in the highest, at an average of $108,201 last school year. This is the average, not the high.

The controversial stipulation that San Dieguito teachers must be the highest paid in San Diego County was negotiated in late 2015 as part of their master contract and may explain the six-figure salary average.

These are the average teacher salaries for local school districts and the percent increase between the two school years, according to the report:

According to the report, the average salary for teachers throughout the state last year rose to $84,531. California’s average teacher pay rose 14 percent from 2014-2015 to 2019-2020, while inflation rose 9% during that same five-year period.

Teachers as certificated employees receive regular raises through their step-and-column agreements, which add dollars for years served and continued education.

Step-and-column pay raises are distinct from contract-negotiated raises, which are typically awarded every few years on top of step-and-column increases.

Districts with more veteran teachers will have higher-than-average pay due to longevity. 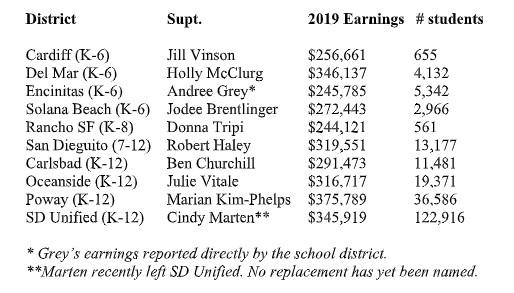 Del Mar’s McClurg had higher earnings in 2019 than even Cindy Marten at San Diego Unified, which oversees nearly 30 times the number of students as in Del Mar.

In addition, San Diego Unified copes with many times the number of students in poverty, English learners and homeless students than Del Mar, where the majority of students come from middle- to high-income families whose parents have college degrees.

Justifying McClurg’s wages, Del Mar school board President Erica Halpern said in an email, “The board of trustees sets compensation for the superintendent and other senior staff after comprehensive review and careful consideration based on performance and results.”

She praised the district’s return to in-person full-time instruction this past fall ahead of most other county school districts, “with zero COVID transmission,” along with a “high-quality distance learning program.”

That’s all well and good, except for one fact: I asked Halpern about McClurg’s high 2019 income package and the 79% increase that occurred from 2013 to 2019 — before the pandemic closed schools and safety measures and distance learning were required.

Poway’s Marian Kim-Phelps, hired in mid-2017, received the highest pay for the districts included in the chart. Transparent California reported salary and benefit earnings of a staggering $375,789 for her in 2019.

Comparisons to previous years for some superintendents were either not noteworthy or not available if they were hired within one or two years of 2019.

Also, Transparent California reports earnings for a calendar year, so if someone is hired mid-year, the data only show the income for a partial year. And because earnings reported here are from a 2019 calendar year, the numbers today may be even higher.

A practice commonly known as “me too” is a custom followed by almost all school districts and has to be one of the most egregious conflicts of interest supported by elected school board members.

Contract negotiations with the heads of the certificated and classified unions are usually handled by the district’s superintendent and select staff members.

Under the customary “me too” practice, the very district officials who bargain with labor unions on behalf of taxpayers also get an equivalent salary increase they’ve agreed to give to their employees.

In other words, whatever teachers get, the “other side” gets too, giving negotiators an incentive to award more money to teachers that they themselves will also receive.

So it’s fair to ask who is actually negotiating for students and the public.

Consequently, the values reported in the superintendent earnings chart are likely higher now because many school districts entered into new contracts with their employees since 2019 and most superintendents took the “me too” raise for themselves as well.

Although Carlsbad Unified Superintendent Ben Churchill and top management did receive the same 3.25% raise in 2018-2019 as was awarded to all certificated and classified staff, Carlsbad is unique among school districts for not awarding its superintendent a “me too” raise for the 2019-2020 school year.

Certificated and classified staff did receive a 3% salary increase for the 2019-2020 school year, but management did not get that, said Carlsbad Unified board President Claudine Jones.

“For the 2020-21 school year, no raises have been negotiated for bargaining groups or management,” she added.

Churchill’s base salary (not including benefits) for the last three years has remained the same: $247,490.

Churchill and his team deserve credit for admirably rejecting this shameful “me too” practice last year, especially in the middle of a pandemic when so many have lost much of their income and livelihoods.

Not so in the San Dieguito Union High School District.

At San Dieguito March 19, 2020, board meeting — just days after the pandemic shutdown, when the district was still trying to figure out how to allow for public participation — Superintendent Robert Haley asked for and received a 3.5% salary increase for himself and his deputy and associate superintendents — the same percentage increase negotiated for his union staff.

The item, buried on page 192 of a 194-page agenda, passed on a vote of 4-1, with Trustee Mo Muir dissenting. The four trustees supporting the “me too” raises were Joyce Dalessandro, Kristin Gibson, Beth Hergesheimer and Melisse Mossy.

The optics, as they say, are terrible.

Perhaps the worst example of this abhorrent “me too” practice happened at San Dieguito in December 2015 and January 2016.

One month later, the board on a split vote approved the same 12.5% salary increase for Schmitt and all management, as well as all classified and support employees.

“The administration has a responsibility to recommend salaries for non-represented groups that are both competitive and within the district’s ability to fund,” the district’s executive summary stated.

The administration “has a responsibility” to recommend salary increases for itself?

Giving the same benefits to all employees that the faculty association negotiates for its teachers “has been our history,” Schmitt told me at the time.

Because it’s commonly done does not make it even remotely acceptable.

This enormous raise for all employees, coupled with the assertion in the teachers’ contract that San Dieguito teachers are to be the highest paid in the county, garnered the notice and contempt of the San Diego County Taxpayers Association that year.

Eric Dill, who was San Dieguito’s associate superintendent of business services at the time, said the combined cost for the 12.5% across-the-board raises in 2015-2016 and 2016-2017 would be about $8.9 million. The financial liability carries forward for all subsequent years.

Dill, by the way, was just hired as Carlsbad Unified’s assistant superintendent of business services after a short stint in Northern California. He begins his new post March 15.

If school districts were required to disclose that any raises given to employees might result in cuts in services to students, the public could better understand the costs down the road.

It turns out districts are required to do just that.

California government code 3547.5(a) requires districts to disclose the major provisions of any agreement, including its cost for the next few years, said Todd Maddison, research director for Transparent California. And that they do, citing how much the raises will cost.

But what the districts don’t do, he said, is complete the section in the Collective Bargaining Disclosure that requires them to disclose the specific impacts on instructional/support programs and the effects the raises may have on their budget.

He said these required disclosures are usually ignored and “flouted with impunity time and time again.”

“The key issue is the fact that districts are making huge financial commitments to support the ‘bonus raises’ they give out periodically without following the legal requirements for disclosure of the impacts of these raises on our kids’ education,” said Maddison, an Oceanside Unified parent.

He said many districts assert that no cuts are needed as a result of their proposed raises, then come to a later board meeting with proposals on what needs to be cut in the future to cover the increased costs of the agreements.

“Districts are often asking for raises for themselves, which will require the district to cut programs and services for our kids, without disclosing that this will happen,” he wrote on his website.

He said there is no other decision made by a board that can change a district’s financial position with the magnitude of a new labor agreement.

This applies also to the “me too” raises, which are handed out based on approved agreements with district labor unions.

School foundations are then relied upon to ask parents and businesses for private donations to cover essential materials and services for students that a district says it cannot afford.

No one denies that teachers deserve a decent wage. And, despite the high salaries, no one is suggesting that administrative positions shouldn’t be paid well, assuming management raises are tied to performance goals as incentives.

But so much of what happens in school districts with huge, publicly funded budgets remains a mystery to parents, students and taxpayers — and that should not be.

With the understanding that public education exists to put student interests first, the public needs to know what teachers earn, how superintendents receive increased pay, and what might need to be cut from student services in the future to accommodate regular and often massive wage increases in the present.

Marsha Sutton is a local education journalist and opinion columnist and can be reached at suttonmarsha[at]gmail.com.