Notes & Quotes: The sun shines brightest on the Pacific 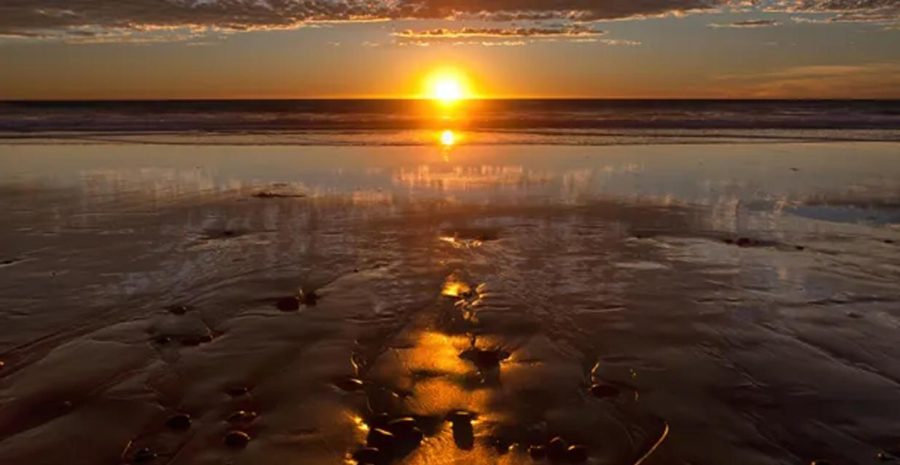 My first adventure following the Western Sun took place in March of 1959. A year earlier, I had joined the U.S. Navy to see the world. After several months of training in San Diego; Norman, Oklahoma; and Brunswick, Georgia, I received orders to a flight squadron (VW-3) on Guam. Getting there took two flights of some 16 hours west from Travis Air Force Base, California, first on a Military Air Transportation Service (MATS) Super G Constellation to Pearl Harbor, then aboard a Pan American Boeing Stratocruiser. This trip was a few months before Boeing 707 jetliners began flying across the Pacific, which would have cut my flight time in half.

The first stop was the tiny island of Wake, one of the 1930s Pan America Clipper seaplanes’ famed Pacific “stepping stones” that served as refueling stops for the huge flying boat airliners.

Wake Island is little more than a mile-wide coral atoll just barely above sea level at high tide. It’s in the western Pacific Ocean, some 1,501 miles east of Guam, and 2,298 miles west of Honolulu. While this was my first big leap in my worldly travels of “Following the Sun,” in reality this trek goes so far west that once we crossed the International Date Line, I was then at the farthest point “east.” Wake is one of the most isolated locations in the world. The nearest inhabited landfall is Utirik Atoll some 590 miles to the southeast. Its position on the globe gives new meaning to “… located in the middle of nowhere.”

The United States took possession of Wake Island in 1899, and is administered by the U.S. Air Force. The center of activity on the atoll is the air field, which continues as a mid-Pacific refueling stop and an emergency landing field. South of its 9,800-foot runway is the Wake Island Missile Launch Center.

Within a few hours of the Dec. 7, 1941, Japanese attack on Pearl Harbor, (it was Dec. 8, 1941 on Wake because it is located on the other side of the International Date Line), Americans were attacked by Japanese bombers, which marked the commencement of the “Battle of Wake Island.” Marines, sailors and 300 civilian construction workers held out for 12 days before surrendering.

The movie “Wake Island” is a 1942 Hollywood propaganda film starring Brian Donlevy and Robert Preston. It tells the story of the U.S. military garrison and some 300 civilian construction workers repelling the onslaught of the Japanese.

During the atoll’s defense, the Marines and sailors put up a fierce fight. During the surrender, the surviving civilians were kept prisoners on Wake. Because a Japanese cruiser was sunk, some American troops were beheaded on the way to Japan to work as slaves in coal mines. The island remained occupied by Japanese forces until it was surrendered to the U.S. in September 1945 at the end of the war.

My travels chasing ol’ El Sol is not unique. North San Diego County probably has more retired military personnel per capita than any place in the U.S.

Oceanside’s Bob Neal, a longtime reader of this column, is one well-traveled old Marine who recently wrote me about his adventures … and they were many:

“I got to Montreal, Canada, San Jose Costa Rica, Okinawa, Vietnam, Hong Kong, of course multiple U.S. cities, plus the 1963 New York World Fair. Of course, during my time assigned to the Marine Barracks in Washington, D.C., I pulled guard duty at the White House, Camp David, and was around the presidents (Kennedy and Johnson) a lot. My big history event was Kennedy’s assassination. I was a casket escort down Pennsylvania Avenue and at graveside in Arlington Cemetery.

“I was on the White House Ceremonial Detail with (President) Johnson, and had one unusual assignment: I was one of the Marines who stood as a ‘guard’ for 30 consecutive days in February 1963, at the showing of the Mona Lisa at the National Gallery of Art.

“I always say one thing in my life I did correctly … I joined the Marine Corps. I always look at the highlights of my time in the Corps, in spite of all of my (Washington) D.C. experience, I had something few experienced. Vietnam was my highlight. I stood my ground and did my job in a shooting war. I can call myself a ‘combat Marine.’ I’m proud of that!

“Today, it’s rewarding to sit on my porch and review my life and all the roads traveled. I’m from ‘Nowhere’ Kentucky; I couldn’t run away from home because there was no railroad to follow. If I went to the road and turned left, I didn’t know where that went. If I turned right, I knew I could only go 12 miles … I didn’t know where the road went from there.”

Right now, there are thousands of our military folks “Following Their Sun” like Bob and I did before them.

Tom Morrow is a longtime Oceanside-based journalist and author who contributes to OsideNews.