Are you reading the North Coast Current or Encinitas Current? Look carefully. Not just at the nameplate, but at the web address. If you thought you were reading one and not the other, beware. It might be by design in this era of murky news outlets, leading to confusion stoked by political parties, bureaucracies, candidates and special interests. 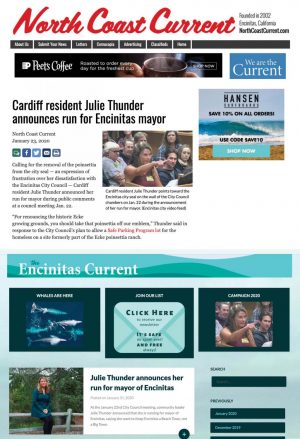 Which Current are you reading? (NCC graphic)

Given the years it’s taken to build the North Coast Current’s brand, it has every right to defend itself against this potential confusion.

Had Thunder and Muir named their sites “Cardiff Coast News” and “Encinitas Coast News,” would the ownership of the long-established Coast News accept it?

“Our original goal, conceptually, was just to have a community newspaper online and just focus on issues that were important to Cardiff,” Muir told the North Coast Current in 2018.

Thunder said in the same article that she had never heard of the North Coast Current. That claim is inconsistent with her outlet’s statement on the site: “Both Mark and Julie would be the first to say ‘We’re not journalists!’” Why would such a statement be necessary unless they already knew a journalistic enterprise with the Current name already existed, covering the same communities?

Neither explained to the reporter why there was such a similarity in name to the North Coast Current.

What happened, however, was that the Cardiff Current website disappeared not long after Muir’s run for City Council as Cardiff’s representative, a race he lost to Jody Hubbard. Then, in a quick turnaround, the Encinitas Current website appeared, incorporating the content from its earlier version. Within a year, on Jan. 31, Thunder announced her candidacy for Encinitas mayor on the site.

Without more transparency from Thunder or Muir in 2018, when the Cardiff Current first appeared, and the behavior of the sites leading up to election seasons 2018 and 2020, the North Coast Current is left with this impression — that the Cardiff and Encinitas “Currents” are designed to mislead residents into reading political sites as news sites.

Since Thunder announced her candidacy for mayor, the North Coast Current has received notes of congratulations and offers of campaign assistance meant for her.

The Current has been derided for supporting a candidate it has nothing to do with.

The Current would prefer to give Thunder and Muir the benefit of the doubt, but a recent trend in politics makes that more challenging. In the past few years, political actors have used “news” sites and “nonprofits” to couch political material as standard news.

In 2014, a site called the Encinitas Beacon appeared, run by a local political commentator, claiming it was “nonprofit journalism” similar to that of Voice of San Diego without proof of its nonprofit status. Like the Cardiff Current in 2018, it didn’t continue past the election season.

In mid-2019, the San Diego Republican Party launched a site neutrally named the “San Diego News Desk” but devoted to boosting GOP candidates and causes, and blurring the lines between information and commentary.

Even the site’s mission statement gives the impression it’s a standard news outlet: “San Diego News Desk is a news site that is dedicated to bringing the latest breaking news and what is happening in our county.”

The only way to know the site’s party leanings is the fine print at the bottom — “Paid for by the Republican Party of San Diego County.”

This trend is not a one-party phenomenon, and it’s a national concern. A July 2018 report by McClatchy noted sites linked to California Republican Devin Nunes and Missouri Democrat Claire McCaskill as examples.

“Watchdog groups for transparent elections say they are troubled by the trend among political campaigns to present campaign messaging as if it were credible unbiased news reporting,” the McClatchy story stated.

In October 2019, reports from the Lansing State Journal in Michigan and The New York Times underscored the concerns.

“The nearly 40 new sites present a challenge for readers navigating a digital media environment that has unlimited space for publishing stories that are hard to distinguish as journalism, advocacy or political messaging,” the State Journal reported.

The New York Times acknowledged that some standard news outlets have overt political leanings, with Sinclair Broadcasting cited as an example.

It’s not unusual in American history. The Party Press era of the 1800s and early 1900s, sometimes known as the Political Press era, predates the notion of objective news. Although news outlets largely shed that approach in the past 80 to 100 years, debate continues whether the approach is valid, and media scholars are revisiting it given today’s climate.

What’s changed, however, is that candidates and political parties are blurring these distinctions entirely — often intentionally, sometimes not. It’s one thing to have Sinclair Broadcasting promote political platforms of its ownership. That’s what clearly defined editorial pages and promotions are for.

So how does a reader judge the validity of a news site not affiliated with a candidate or party? Consider these tips:

Look for clear delineations between standard news content and opinions, which should be clearly labeled as such.

See if the outlet offers a clear opportunity for letters to the editor or commentaries from opposing points of view. (Recently, the North Coast Current published an opinion piece countering an editorial about the ongoing Cardiff Elementary School legal dispute.)

In editorials representing the management or ownership, see the types of causes and people they support. (The North Coast Current, for example, has opposed and supported Mark Muir’s City Council positions in the past, depending on the issue.)

Look at the site’s “About” page. See what details are offered about the outlet’s policies and ownership.

If the site has comments, try to assess how robust the moderation is. Are comments a potentially libelous free-for-all, or does the site try to maintain a constructive, civil discourse?

In this era of hazy political and media distinctions, it’s essential that consumers keep a critical eye on the sources of information they rely on, from neighborhood activism to national candidates. That includes the North Coast Current. We invite letters to the editor at letters[at]northcoastcurrent.com.