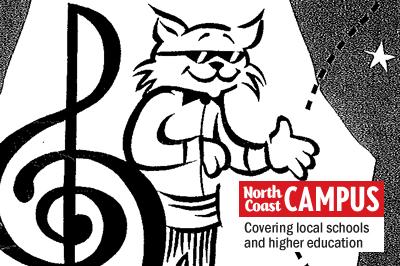 Proud parents and supporters filled the Ada Harris Elementary School auditorium, clapping as the lights dimmed and members of the Wildcat Band made their entrance through the side doors. Dressed in their black and white formal best, the Beginning Band members took their seats on stage and waited for their director, Catherine Gold, to begin the Spring Concert on May 20.

The Wildcat Band is a group of elementary students ranging from the fourth to the sixth grade. A total of 86 students are involved in the band and create three separate entities, the Beginning Band, the Advanced Band and the Chamber Ensemble. Some of these hardworking and dedicated kids have mastered their instruments after countless before- and after-school sectional practices.

The Beginning Band started off its musical performance with a cover to the familiar song, “When the Saints Go Marching In.” The 34 members of the Beginning Band are in their first year of the Ada Harris instrumental program. Without much experience, one would expect the band to stick to a much simpler song with the same scale and melody. However, these fourth-graders took on a much more difficult approach with a pentatonic scale in several of the songs in their performance, which emphasized five musical notes per octave.

Katrina Goldsmith, president of the Cardiff school’s Music Boosters, has had the opportunity to watch the band progress.

“It is amazing to me that after two months they are playing simple nursery rhymes together, and a year later they are playing complex band arrangements with multiple melodies, movements, and even tempo changes,” Goldsmith said. “You can sense their brains working overtime as they work together to perform a piece to music.”

If that’s not impressive enough, the eleven Chamber Ensemble participants took the stage next and showed off their talent through four musical pieces, including the “Mission: Impossible” theme song. These band members are students from the Advanced Band who have continued their interests in music and have been specially selected to perform pieces of even higher difficulty. The director, Catherine Gold, explained to the audience that the objective for these particular students is to expose them to “a wide variety of band literature that they would not find at a middle school level.”

The Chamber Ensemble focuses on the importance of multitasking — being able to read the music, follow a conductor and listen to other instruments in various sections sets the bar high for other educational music programs.

The Spring Concert was the last concert of the academic year and prompted much appreciation for the band members and their supporters.

The Ada Harris Wildcat Band started about 25 years ago and has struggled to spread the word of its music since. Almost all San Diego County schools have been forced to scale back or cancel art and music programs due to harsh budget cuts. In fact, the school’s program recently had a $5,000 deficit. To close the gap, parents created their own organization in order to help raise enough money to keep the program alive.

The Music Boosters is an all-parent organization that makes personal donations and partakes in school bake sales. Because there are no fees for those students who are interested in joining the band, but there are additional expenses to cover, the Wildcat Band has taken several partnerships that include the Coastal Communities Concert Band and The Belly Up. They also continue to apply for grants with the city of Encinitas. Students attending Ada Harris are able to get the uncommon musical education attention and use the after-school activity as a means of learning. They have committed themselves to the program at least once a week before and after school and frequently participate in city parades and school concerts.

Gold, who works closest with the students, added that the program is of high importance to the band members’ personal development, as it “instills important values of discipline and enriches a child’s life by allowing for creativity.”

Parents are also advocates of the music program for reasons beyond childhood development.

“I have had the privilege of being there to hand a child their first instrument and see how they glow with pride and wonder,” Goldsmith said. As the mother of two children who have taken a role in the Wildcat Band, she said she believes that the program has been a significant factor in her kids’ individuality.

“This program made a profound difference in both my kids’ lives. It’s not that it changed their identity, but rather it helped them discover their identity,” Goldsmith said. Her son, Sam, who is currently in the eighth grade, said that the band program gave him a sense of belonging and he was more confident entering middle school, and soon high school, knowing that the transition would not be challenging. Parents whose children have joined the Wildcat Band have been able to see a positive impact in their children due to the structure of the program.

“The Ada Harris Wildcat Band is a well-oiled machine under the direction of Mrs. Gold and Coach Steve Brown,” said Becky Rideout, mother of three Wildcat Band members. She said that because of the music program her children “have become more focused; their thought process has changed; they look at things in a more creative way.”

Rideout’s daughter, fourth-grader Alexa Davis, who just finished her first year with the band, could not say enough how much she enjoys the musical curriculum. “I have only been in the Ada Harris Wildcat Band for one year, and I have been so happy,” Alexa said. “I have had a great experience in the Ada Harris Wildcat Band, and I have had so much fun learning and playing the clarinet with the other students. I have to say again, I have had an amazing experience in this band.”