Grauer School expeditions offer much more than ‘chalk and talk’ 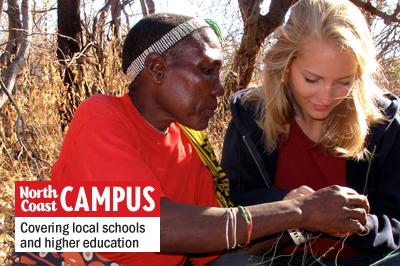 For some schools, building a rigorous education model requires a meticulous balance — and more.

Take the Encinitas-based Grauer School, which is best known for balancing Socratic and discovery-based learning with rigorous college preparation.

Founded in 1991, the school has 150 students and offers grades 7 to 12, and is accredited by the Western Association of Schools and Colleges.

“I believe we achieve this balance as well or better than any school in the world,” said Stuart R. Grauer, headmaster of the private school. “This is more than an insider observation. Our faculty, in an anonymous, nationwide survey, voted Grauer as one of the top 10 places in the nation to work. Normally, in our anonymous surveying, 100 percent of our faculty members and students say they like school.”

Grauer, Ed.D., serves as president/head of school. The school is managed through The Grauer Foundation for Education.

Board member Doug Katz emphasized the school’s focus on the enjoyment of learning.

“The Grauer School is an incubator for imaginative, independent minds,” Katz said. “It knows the art of enchanting students with the joys of learning.”

“In the recent high school survey of student engagement, taken by 28,000-plus students nationwide, Grauer School blew the top out of the norms in every single area, including student perception of engagement in diversity,” normally thought to be a feature of larger schools, Grauer said.

But besides these stats, the school offers what it calls The Grauer School Expeditionary Learning Program, considered one of the school’s original programs derived from its founding principles in 1991.

“Our very first lesson was in physical science. Rather than chalk and talk it, I simply asked the students how they wanted to learn about it,” Grauer recalled. “Earthquake faults were the topic at hand. The students had no idea how to start. Their entire learning to date was based on an understanding that a teacher gave information and the student sat and received it.”

Grauer said he could see right away that the concept of students seeking their own knowledge and learning by discovery was foreign to them: “‘How can we find out about faults?’ I inquired, but they just sat there. So finally I caved and I threw them a phonebook. Before long, one of them magically had an uncle on the phone who was a professor at UCSD. He recommended another person and the students gathered around and called him. I had a wonderful sense of a thawing, a coming back to life and learning for these kids,” he said.

Soon enough, they learned that there was an earthquake fault right in San Diego, Rose Canyon. So they got in a big Suburban wagon and drove there and hiked around.

Every student in every grade goes on two weeklong expeditions each year, one each semester. But the school incorporates expeditionary learning in the regular classroom, as well, in accordance with its motto, “Learn by Discovery.”

“We tried a little of that early on and I could see that the guides were much more engaged than the students,” he continued. “So Grauer expeditions are full-engagement: we immerse into schools, clinics, tribes, leagues, performances and service opportunities. We perform at coffee houses. We get our hands dirty. And we always find ways to serve others wherever we go.”

Science and math teacher Brendan Wallace said the school offers “a place where we connect school to what is most important to your life.”

Where do they go?

“Our students have visited quite a few Indian reservations, although not the local ones. From expeditions, our students remain friends with kids on the Pine Ridge Indian Reservation, the Nanwalek in Alaska, and the Navajo School,” Grauer said. “I was on all three of those adventures and they opened up valuable, cross-cultural connections for us. We also have visited and befriended students from various tribal areas worldwide.”

As for Grauer, for some years he developed the expeditions himself. However, he said, over the past decade or so, his role has been to cultivate a culture of expeditionary learning school-wide.

“We build leadership capacity among teachers and student leaders as they develop their own expeditions in concert with the school’s tenets for best practice learning. All faculty and students are invited to submit proposals, so I’d say my role is to create the conditions for entrepreneurship. You can go anywhere if the rationale is strong,” he said.

Who pays the bill?

The paid-for expeditions each semester are covered by tuition. If an expedition is proposed that is farther away than eight or 10 hours of driving, it normally has added costs. All extra-fee trips have scholarships built in so that they can be inclusive.

The trips are open to various ages: all-school trips, middle school only, high school only, etc. The age limits depend on the purposes of the trips. For instance, Grauer runs trips that visit the colleges of a region of the United States, and those trips are targeted for senior high students only.

Grauer said the feedback the school has received is more than positive.

“Almost invariably, when our alumni come back for reunions or write in, they love reflecting on their expeditions,” he said. “The most fundamental outcome of these trips, according to students and teachers, is connectedness. They leave as individuals and return as a part of a team. Some students who might not shine in some classroom environments could be superstars and leaders afield.”

“Grauer School kids can see beyond themselves and openly want to lend a hand to those in need,” parent Deanna DeFrank said. “The Grauer School encourages our kids to be resourceful, kind, and compassionate; not just intellectuals.”

The focus is reflected in parent feedback.

“The Grauer School is for restoring the human connection in school,” parent Christina Burress said.

Grauer himself has attended at least 25 expeditions over the past 25 years at the school and has collaborated in the development of a great many more.

“In 2005, I realized that our students would be handicapped if they did not understand the Chinese and I launched the first school trip I had heard of. We were the first American students ever to set foot in Shanghai University Attached Middle School; a middle school is the equivalent of our grades 7-12,” he said.

“We were the first school to stay with the Nanwalek tribe in Alaska and I even took a delegation into the schools in Cuba last year,” he continued. “I love taking students into immersion experiences in schools. We went hunting and gathering with a hunter-gatherer tribe across the Great Rift Escarpment in Tanzania.”

Like his students, Grauer has learned much about these expeditions: “One of my favorite learnings about expeditionary learning involves the instances I see for age-mixing. When you consider that, in the history of the world, the primary way of learning has been for students to teach one another, it’s a bit stunning to consider that age-mixing has been almost completely removed from our schools. On our expeditions, it is incredibly heartening to witness older students taking on younger mentors and students mixing across the standard high school groups.

“I have learned that cross-group mixing can occur very well if we take time every day to reflect as a group on our interactions of the day, time to acknowledge and honor this type of interaction,” he said.

Given their success, Grauer said the expeditions aren’t going away anytime soon.

“We have no plans to change this program. However, we are adding more opportunities to participate in stay-at-home ‘intensives’ where students dive deep into an area of study locally,” Grauer said. “We’ve learned that it’s all about team-building and focus on a theme, and that we can even do this in our own back yard. One parent referred to Grauer as ‘an oasis of heartfelt education.’ It is important to remember that immersion into authentic experience can happen every day, not just afield.”