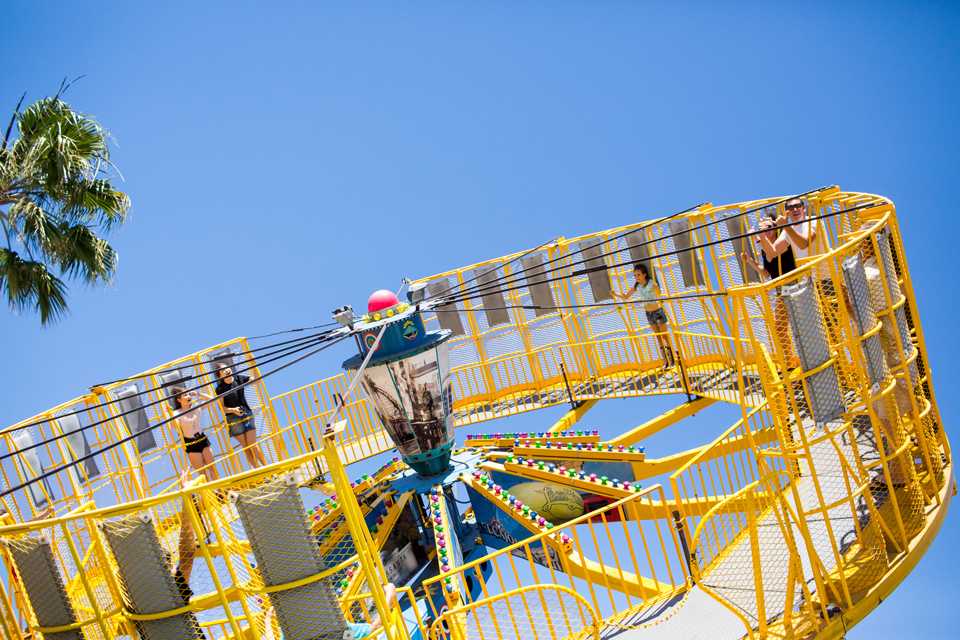 Spencer Howe and Natalie Boudin make a “hang loose” sign with their hands as they spin on the ride "Round Up" at The Encinitas Street Fair on April 30. The ride is roughly three minutes in duration and moves rapidly at high speed. (Photo by Cam Buker)

The annual Encinitas Spring Street Faire is back again this weekend and is celebrating 35 years with blocked-off streets, food and entertainment.

“Each year we see between 40,000 and 50,000 people each day,” said Irene Pyun, executive director for Encinitas 101 MainStreet Association.

The free, two-day event will take place Saturday, April 28, and Sunday, April 29, from 9 a.m. to 5 p.m. between D and J Streets on Coast Highway 101. According to Encinitas 101 MainStreet Association’s website, both days will feature more than 450 vendors, including food trucks and arts and crafts.

There will also be four entertainment stages, children’s rides and bike valets, where you can cycle in, valet your bike and enjoy the fair without worrying about the safety of your bike.

Since the fair closes multiple blocks, parking may be an issue. There will be no parking available on Coast Highway 101 from D Street to J Street from 4 a.m. to 6 p.m. both days.

“I always like to encourage taking the coaster or biking in,” Pyun said.

Another option, according to Pyun, is to pay to park at the future Pacific View Academy of Arts, located at 608 Third Street. Pyun said this is the first year Pacific View is offering paid parking, and 100 percent of the proceeds will go toward restoring this previous elementary school into an arts and culture hub.

“They just got approved to offer public parking,” Pyun said.

Music is again a big part of this year’s event, and attendees can expect to see a wide range of bands and DJs. The beer garden will have its own stage and music will kick off at noon Saturday and 11:30 a.m. Sunday. The courtyard stage will also have music that will begin at 11:30 a.m. Saturday and noon Sunday.

The artists range from ska-reggae (Ease Up) to cult country (Clint Westwood) to soul and funk rock (JB and The Movers) to Blues Americana (Sarah Rogo Band).

Saturday’s musical festivities at the beer garden stage will go later than 5 p.m. with The Routine, a soul, rock and world funk band, taking the stage from 5:30 to 7 p.m.

According to the festival’s Facebook page, the Stone Brewing Beer Garden will feature craft beers and will be located at Coast Highway 101 and I Street next to Lumberyard Tavern and Grill.

JoJo’s Creamery, an Encinitas ice cream shop, will make its first appearance in the beer garden this year, as will Boochcraft, “California’s first high-alcohol content kombucha.”

Scripps Memorial Hospital in Encinitas is the presenting sponsor of this year’s street fair and festival.