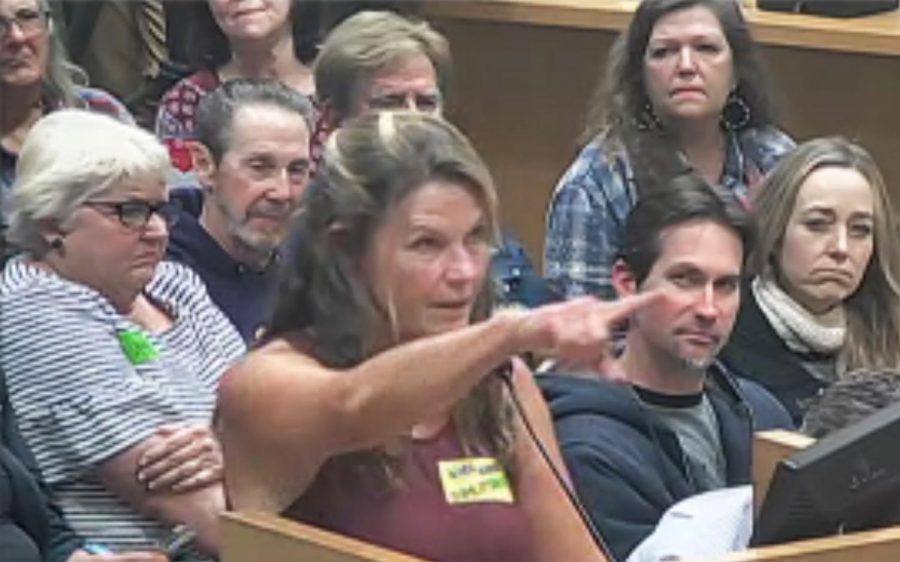 Cardiff resident Julie Thunder points toward the Encinitas city seal on the wall of the City Council chambers on Jan. 22 during the announcement of her run for mayor. (Encinitas city video feed)

Calling for the removal of the poinsettia from the city seal — an expression of frustration over her dissatisfaction with the Encinitas City Council — Cardiff resident Julie Thunder announced her run for mayor during public comments at a council meeting Jan. 22.

“For renouncing the historic Ecke growing grounds, you should take that poinsettia off our emblem,” Thunder said in response to the City Council’s plan to allow a Safe Parking Program lot for the homeless on a site formerly part of the Ecke poinsettia ranch.

The Ecke property, now known as Leichtag Commons, was sold to the Leichtag Foundation in 2012. Leichtag Commons describes its mission as a focus on innovative agricultural and educational programs, Jewish community engagement, and arts and culture initiatives.

The Safe Parking Program lot, which would be run by Jewish Family Service in addition to three in the city of San Diego, was among a list of grievances Thunder shared in her announcement.

Recalling the small-town feel of Encinitas in 1986 at the time residents voted to incorporate as a city, Thunder reminded the council and audience that residents at the time voted for cityhood to avoid the very issues it now faces.

“Today, we are back where we started, with a mayor and council that seem to cherish big-city values,” she said. “Clearly, you want Encinitas to look more like San Diego.”

Thunder said the City Council is ramming through disputed legislation that residents don’t want, and she lambasted council members for suing fellow residents over the passage of Proposition A, a land-use measure at odds with state housing mandates.

“Slowing the process down is called due diligence,” she said, “and allows thoughtful decision-making. Listening to residents is part of that process.”

Thunder also took council members to task over recent traffic management decisions and housing development approvals that she said are eating away at the city’s character, including in her community of Cardiff.

“In Cardiff, you gave us a slice of big-city Mission Beach with your concrete rail trail that becomes a beach boardwalk in summertime.”

Thunder summarized her frustrations by citing the expected approval of the Safe Parking Program lot.

“You’ll likely approve a regional, even bigger than big city, homeless parking lot and slap it right in the middle of one of our cherished agricultural properties,” she concluded. “For renouncing the historic Ecke growing grounds, you should take that poinsettia off our emblem.”

“To everyone here tonight, please join me, right here and right now, in keeping Encinitas a beach town, as I hereby announce my candidacy for mayor.”