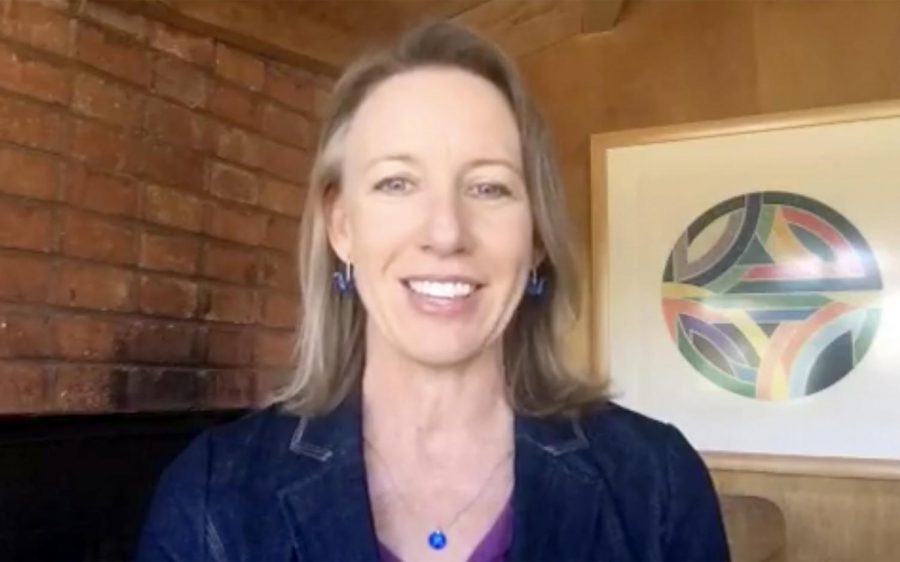 Blakespear’s entry into the race comes at a time when the city faces multiple crises, from the COVID-19 outbreak that has shuttered businesses to a homeless-support program that has drawn the ire of some residents.

“I am a daughter of Encinitas,” Blakespear said in her livestreamed announcement, “and I am a steward of our environment, of our culture, of our people, and of our infrastructure. And I hope that you will support me to continue as Encinitas mayor.”

The official announcement makes the election a two-person race as of now. Encinitas resident Julie Thunder declared her candidacy Jan. 22 during heated public comments at a City Council meeting over a homeless parking program.

The program has been a contentious issue in Encinitas and stands to be a focus leading up to November.

The parking lot, located on Leichtag Commons property formerly part of the Ecke family ranch, is one of four operated by Jewish Family Service in the region. The Encinitas lot aims to accommodate 25 spaces for households living in their cars.

“There is a homelessness epidemic,” Blakespear said in the announcement, noting that it’s a problem reaching coastal communities throughout the state, and in Oregon and Washington. “The notion that Encinitas is somehow going to avoid that is, I think, completely naive and ignorant.”

The city’s approach to homeless-crisis solutions drew international attention in late February and early March when an Australia-based surf culture website highlighted the parking program. Locally, differing sides on the issue used the story to highlight the divisions the program has caused.

Detractors went on offense as far as two months ago. In late February, an administrator of the 1,500-member Facebook group Encinitas Watchdogs announced the creation of a “black list” of residents who supported the City Council’s homeless initiative, according to group screenshots provided to the North Coast Current. Hours after Blakespear’s announcement, the same administrator stated that “World War 3” had begun, screenshots provided to the North Coast Current showed.

The COVID-19 coronavirus pandemic poses challenges to campaigning, Blakespear noted in her announcement.

“In the age of coronavirus, a campaign cannot be built on going door to door, or speaking at house parties,” she said, explaining the importance of fundraising to reach voters using other methods.

Earlier in the video, Blakespear said that she felt for city residents as they continued to follow physical distancing and stay-at-home orders. Blakespear also said that she continues to receive reports from local businesses that have furloughed or laid off numerous employees.
From housing and the economy to the city’s future post-crisis, Blakespear told viewers that now is a time to reflect on personal habits and perceptions.

“I think of this in terms of my role as the Encinitas mayor and the problems that we confront as a city, and I also think of it in personal terms,” Blakespear said. “Because of the difference of our day-to-day life … we can really ask ourselves questions and shake off that inertia of doing something because that’s the way we’ve always done it.”