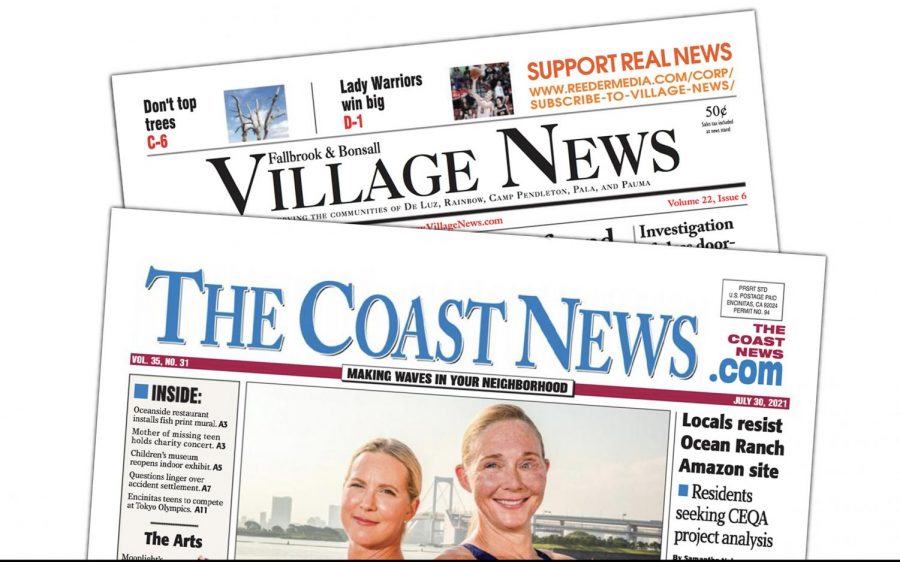 Despite residents of north San Diego County taking a greater interest in the news this past year, local news outlets were not spared from the financial blow of the pandemic.

Chris Kydd, associate publisher of The Coast News Group, and Julie Reeder, owner and publisher of Fallbrook-based Reeder Media, both cite an increase in readership since March 2020. Their bottom line remains a point of concern, however.

It’s an issue that’s hardly exclusive to Southern California, with more than 70 community publications across the U.S. shuttering since COVID-19 stimulated an unprecedented shutdown of the economy, according to the Poynter Institute.

Kydd said his publications took about a 45% cut in revenue last April and that cash flow remains a major issue.

“Advertising has a direct correlation with peoples’ sense of optimism for the future, and because there’s so much uncertainty about another lockdown, we’re seeing less confidence that they’re going to get a return on their investment,” he said.

For Coast News’ publication The Rancho Santa Fe News, the financial stress posed by loss of advertising revenue and canceled events became the final nail in the coffin for a paper that struggled to compete in its coverage area.

“There’s just not enough news happening in the community of Rancho Santa Fe to have two thriving local papers out there,” Kydd said, emphasizing that the paper’s return is not impossible yet remains unlikely. “Basically, there was not enough degrees of separation between us and the Rancho Santa Fe Review.”

The Rancho Santa Fe Review is owned by The San Diego Union-Tribune. The Coast News Inland Edition, which includes coverage of San Marcos and Escondido, continues to publish.

Reeder said she believes the lack of competition in her papers’ coverage area — which includes north San Diego County and southwest Riverside County — has actually stimulated readership during the past year. But issues with revenue and staffing have become significant hurdles.

Reeder Media’s publications, which include The Fallbrook & Bonsall Village News, were hit from both sides, she said, as mom-and-pop businesses couldn’t afford advertising and big-box stores were so inundated with customers that they didn’t need to.

Despite their shared struggles, Kydd and Reeder both said the pandemic made clear the significant role of community publications in bringing people together and said they were happy to play this part during tough times.

“We’re in the business of building community and we have so many special people around here,” Kydd said. “We can showcase some of the resilience the community displayed during these hard times, and it’s an honor to tell those stories.”