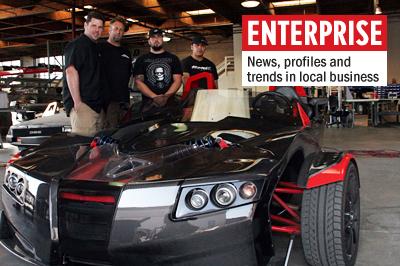 The recently unveiled Torq Roadster by Epic Electric Vehicles in Vista is a three-wheeled, race-inspired electric sports car that’s not a car and runs side-by-side with some of its top fossil-fueled brethren.

Registered as a motorcycle, the zero-emissions, open-cockpit two-seater – powered by a 190 volt lithium ion battery system running a DC motor – has a range of up to 100 miles per charge if run conservatively. Starting at $65,000 for a base model, the Torq is capable of accelerating from 0 to 60 mph in four seconds while producing a maximum of 300 horsepower and 600 ft/lbs of torque.

That puts the 2,200 pound, carbon fiber body vehicle in a speed class with the Aston-Martin Vanquish, Ferrari 360, Lamborghini Diablo and Porsche 911. Some of the Torq’s closest cousins include track cars such as the Champagna T-Rex, Ariel Atom and KTM X-Bow.

“This vehicle is interesting because unlike other electric vehicles, you can put it in your garage and work on it like an old Mustang,” said Chris Anthony, head of Epic EV and co-founder of Aptera Motors, which endeavored to build the world’s most fuel-efficient vehicles for the masses.

Spare parts for the Torq can be found just about any place in the world. All of the wearable components from the main bearings in the wheels, brake pads and steering rack are from a Volkswagen platform.

“We set out to make it electric, fun, easily upgradeable and simple enough that a person with the intellectual experience to fix a golf cart can customize it,” Anthony said. “Unlike other electric vehicles, which are locked, it’s really the only one out there that’s tunable.”

Modifications can be made to the car’s Formula One inspired chassis, brake system, suspension and motor. Additional options for the Torq include battery upgrades for increased range, carbon fiber accent kits, custom paint and seat covers.

The Torq’s dashboard is rather sparse, allowing for all types of electronic accoutrements to be installed. The car’s systems are all displayed on a Samsung tablet running an Android application that can also be upgraded.

Mike Stewart – part of the original research and development team that designed the prototype Torq – said that his favorite features include the inboard suspension paired with Bilstein coils over race shocks and four-piston, Wilwood Dyna Pro brake calipers. Stewart – who has logged more than 10,000 miles in a Torq – added that the car’s weight distribution, teardrop shape and 80.5 inch track width allow drivers to take turns at up to 50 mph while pulling up to 1.3 lateral Gs.

“People on the road don’t know what to make of it,” Stewart said. “They swerve all over the place just to catch a glimpse or pull out their cell phones to shoot a picture. It’s truly the weirdest thing.”

Anthony explained that the Torq was developed as a way of demonstrating the battery technology developed by Flux Power – a company he also founded. The backbone of the vehicle, he said, is its race-inspired, lightweight steel chassis, which provides strength and aerodynamics and allows for the efficient storage of batteries.

“Because of the price tag, this car isn’t really for the commuter,” Anthony said. “It’s more for the person who enjoys taking the turns in a sports car on some nice terrain up in the mountains on the weekends.”

Epic EV also designs and manufactures electric off-road vehicles and was the first to develop an electric-hybrid wakeboard boat.

Anthony said that the company is putting out one new car per month and expects to ramp up production in 2014 as the economy continues to improve and enthusiasm for electric vehicles increases. The first Torq Roadster was recently delivered to one of the original executives of Tesla, which gained widespread attention for producing the first all-electric sports cars.

More information on Epic Electric Vehicles can be found at www.evepic.com.