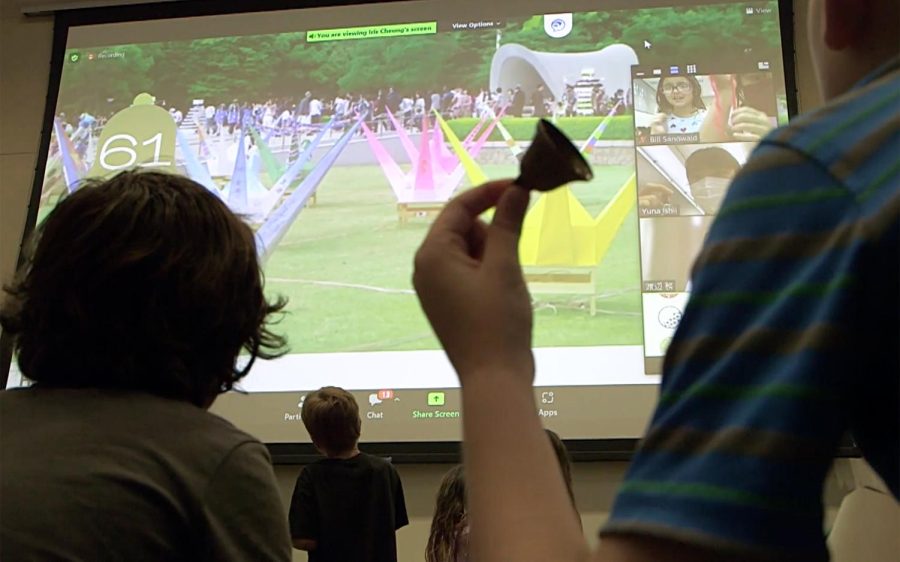 Carlsbad children ring bells along with their counterparts in Futtsu, Japan, during a live Zoom teleconference on Aug. 5. (Carlsbad city image)

Children and families gathered at the Carlsbad City Library on Aug. 5 for a special program commemorating 77 years of peace between the United States and Japan since the first use of an atomic bomb in Hiroshima.

In a live Zoom teleconferencing session with residents of Futtsu, Japan — Carlsbad’s Sister City — the two groups rang bells 77 times to carry out the 2022 Ringing of the Peace Bells. Each ring of the bell signifies one year that has passed since the atomic bomb fell on Hiroshima.

The event also featured a storytime about the topics of peace and friendship and a Japanese-themed craft activity.

“Carlsbad City Library is honored to partner with Carlsbad Sister Cities Ambassadors to take part in a recognition of the importance of peace,” Carlsbad city Senior Librarian Bill Sannwald said. “The Ringing of Peace Bells ceremony is a stellar example of how libraries can serve as community connectors to help bring people together, even from different parts of the world. With a focus on the themes of peace and friendship, the event allowed children and adults alike to better understand the interconnectedness that exists in our world. Attendees enjoyed a storytime, created a craft, and participated in the ceremony in real-time with representatives from Carlsbad’s Sister City, Futtsu, Japan. Our goal is for the shared experience to foster feelings of understanding, acceptance and togetherness between people with very different customs and cultures.”

Sister Cities International was created at President Dwight D. Eisenhower’s 1956 White House conference on citizen diplomacy. The organization’s mission is to promote peace through mutual respect, understanding and cooperation. As of 2020, there were more than 455 sister city/state relationships between the U.S. and Japan, the largest single binational component within the worldwide network.

North Coast Link offers nonprofit groups, public agencies and organizations of varying interests the opportunity to share their news by submitting press releases for publication. Send yours to news[at]northcoastcurrent.com.