Visitors can learn about the fruit now through Sept. 22 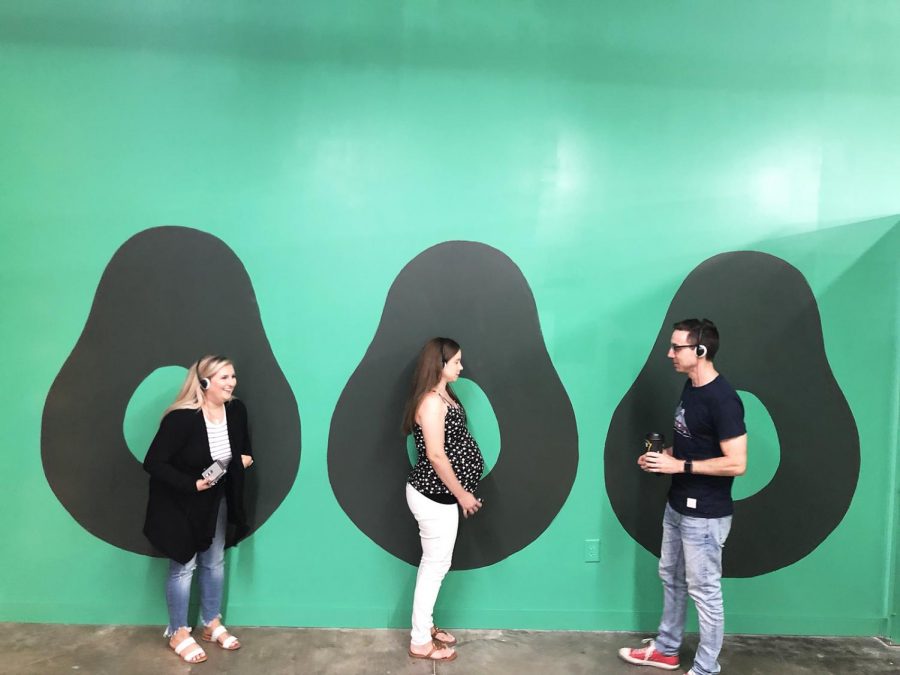 Joanna Rossoni, Briana Fillmore and Sam Bouffard participate in activities at The CADO museum in San Marcos on July 6. The pop-up museum is dedicated to the avocado. (CADO Museum photo)

Since late June, The CADO museum in San Marcos has dedicated itself to presenting the history and educational significance of the California avocado.

Anne Buehner and Mary Carr are the creators of The CADO museum. The sisters and their creative agency, & boom Unlimited, assembled the pop-up museum with the intention of creating an educational experience for its visitors.

“We saw an opportunity for an educational component,” Buehner said.

The CADO is the first major project for & boom Unlimited. According to Carr, the San Diego-based creative agency focuses on “placemaking” and developing “in-person experiences.”

“Pop-up museums are a trend,” Carr said. She and Buehner wanted to create “something that represents San Diegans.”

According to Buehner, the idea to incorporate the avocado as a central theme for the museum came out at random. Both sisters understood the popularity of avocados on social media.

According to Jan DeLyser of the California Avocado Commission, The CADO’s title sponsor, Buehner and Carr reached out to them about sponsoring the museum.

“We thought it was a nice way to tell the California avocado story to consumers,” DeLyser said. She also said that the museum presents an “Instagrammable” moment and how “the opportunity to visit these pop-up museums is a way to engage with consumers.”

The museum itself showcases a variety of exhibits, most of them created by Buehner and Carr. The exhibits are dedicated to explaining the labor and science behind growing avocados and how one can determine its ripeness.

“So many people consume avocados but don’t know the labor that goes with it,” Buehner said.

When guests first walk into The CADO, they are provided with a cassette tape recorder and headphones. Guests listen to a brief introduction of The CADO, narrated by musician Jason Mraz. After listening to the tape, guests are led to a wall containing three-dimensional art pieces that simulate an avocado’s texture. Guests are given an opportunity to feel the “avocado-skinned” walls.

“The goal is to find the ripe avocado,” Buehner said.

Other exhibits in the museum include a table painted on the wall with all the vitamins and periodic elements in an avocado, a giant 3-D model of an avocado’s color gradient, and a geodesic dome representing an avocado’s pit. The dome was designed in collaboration with artist Kristin Morrison.

One of the most intriguing exhibits on display is a piece of the first Hass avocado tree. According to Buehner, the tree, known as the Mother Hass Tree, was the first one in the world to produce the Hass avocado.

Buehner explained how Rudolph Hass, a mail carrier from Milwaukee, first planted the Mother Hass Tree in La Habra Heights in 1926. The Hass avocado became patented in 1935 and has since become the most popular variety of avocados.

“The Hass avocado is the most popular avocado in the world,” DeLyser said.

Toward the end of the tour, Buehner explained the importance of sustaining natural resources in order to grow avocados. She encouraged visitors to “be wise about each decision” when it comes to conserving resources like water how those decisions affect produce production.

“Our whole Earth is an ecosystem,” Buehner said. “Everything is connected.”

Buehner said she hopes that The CADO museum attracts a wider audience and that “each person walks away with a new appreciation for the avocado.”

Some museum visitors enjoyed the tour and the exhibits on display.

“I loved the interactivity,” Linda Hargrove said. “I learned a lot of information I didn’t know about avocados.”

Marie Martin said that she “liked the concept of the portability of the experience.”

The CADO is located within walking distance from California State University San Marcos and is open Thursday through Sunday. The pop-up museum will remain open to visitors until Sept. 22. For ticket purchases or more information on the CADO Museum, visit its website at www.thecado.co.