The implementation of Measure GG, a bond program approved in 2016 that allocated $22 million to remodel two Cardiff schools, has sparked a trail of discussions over whether George Berkich Park is legally allowed to undergo any changes.

That debate is rooted in decisions made more than 20 years ago.

The park, named after former Cardiff Elementary School Principal George Berkich, has been temporarily closed as part of a recent construction project to revitalize the aging Cardiff Elementary campus. Randy Peterson, the district’s bond program manager, said many of the campus buildings were between 60 and 70 years old.

Opponents of the project say the renovations are unpermitted because past agreements between the Cardiff School District and the city of Encinitas state the school’s recreational space is supposed to serve as a public park during non-school hours.

The project would entail converting 20% of the school’s current park space into a multipurpose building, classroom and parking extension, closing it off from public recreational use. 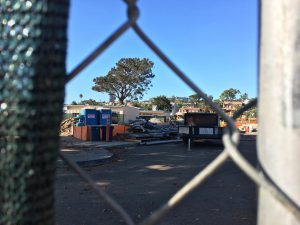 Eleanor Musick, director of a local advocacy group opposed to the project called Save the Park Build a School, also said the school’s recreational fields benefited from the use of federal grant money in the 1990s. Provided through the National Parks Service, part of the grant’s provisions require that the land covered in the agreement remain open for public use “in perpetuity.”

“That’s all just saying that the space within the project that they outlined, that they got the grant funding for, had to be used for public outdoor recreation use and it couldn’t be converted into anything else,” Musick said.

The advocacy group filed a lawsuit against the school district in April alleging the project would illegally reduce the availability of open space on the site through the construction of campus facilities on the land.

The district has stated that although part of the open space will be covered by campus structures, the overall usability of the space will be increased after the project. Peterson said the idea that the land must be reserved for public use is a misrepresentation and that the area should not be considered a public park.

“This is school playfields,” Peterson said. “This is land that is, by the state of California, designated to be used for an operational school.” 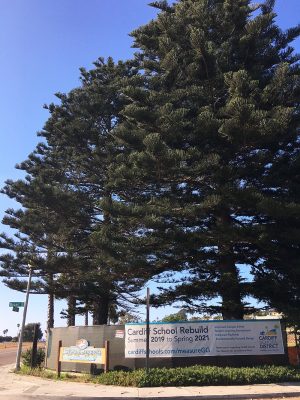 The status of George Berkich Park, pictured Sept. 17, is in debate between the Cardiff School District and residents as construction continues at the district’s Cardiff Elementary campus. (Photo by Roman S. Koenig)

According to a webpage about Measure GG, the district is working with the California State Parks Office of Grants and Local Services to ensure compliance throughout the project.

However, an email sent to Musick from the National Parks Service stated the summer closure of the park to begin construction was out of compliance with the grant’s provisions.

“The announced closure makes it appear that the School District and The City have decided to go ahead with their development plans prior to compliance with federal requirements,” National Parks Service official David Siegenthaler said in the June email.

The controversy surrounding the project worsened at the end of August after a Torrey pine tree had to be removed in the course of construction, a decision that opponents of the project said should not have been approved.

Peterson said the tree had to come down in response to community concerns about the span of the project. When the plan was revised, the tree would have been too close to school buildings. The city’s arborist recommended the removal, he said.

“The plan actually replaces more trees on the site than are currently existing,” Peterson added.

Although members of Save the Park Build a School have been outspoken with their grievances about the project, Peterson said the group represents a very small percentage of the Cardiff community. Measure GG, which allocated funds for the project, was approved by 66% of voters in 2016. He said the community was also largely supportive of the project at public forums during its early phases.

Construction on the campus was split into two phases: one that focused on the area not restricted by the federal funds and one that includes work within those boundaries, including the construction of new buildings. Peterson said phase two will begin in a few months.

Signs posted around campus indicate the project should be completed by spring 2021.